You can buy Elizabeth’s books, Oysters to Angus and Ethnic St. Louis, on Amazon. Click on the cover images for links. 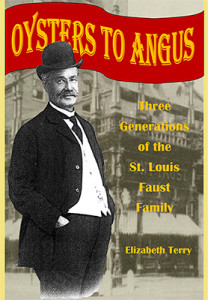 Tony Faust entered rough and rowdy St. Louis in the mid-nineteenth century. As patriarch of the Faust family, he lived lavishly while rebelling against those who wished to shut down his saloon. Tony’s savvy son, Edward, rose to the top of the St. Louis business elite, and in so doing, shunned his German-American heritage. In contrast, Tony Faust’s steady grandson Leicester quietly built his farm in St. Louis County. That land became his legacy: a park built upon the proud Faust name.

This scholarly work boasts original research and provides a fresh perspective on pivotal events in St. Louis history. Through it all, the Fausts navigate the timeline alongside the iconic Busch family, firmly entrenching themselves as movers and shakers of the St. Louis scene. In Oysters to Angus, Elizabeth Terry accomplishes the challenge of providing both an academic study and a must-read account of one of America’s influential families.

Elizabeth Terry has a Masters in public history from James Madison University in Virginia. She manages a diverse range of projects through her historical research company, and directs an archives for a St. Louis church. Ms. Terry also authored Ethnic St. Louis and is currently researching her next book project.

Take a look at Elizabeth Terry’s contribution to this Riverfront Times piece on Faust beer!

Here is Elizabeth discussing Oysters to Angus on STL TV!

“’Oysters to Angus’ is, indeed, an interesting and very fascinating writing about a famous St. Louis family. Well done! I enjoyed it very much.”

“I love seeing so much more information than I ever knew about the Faust family. I especially love the personality you paint for each of the family members. I had never seen the cartoon of Anthony R. and Monsieur Gallais fencing over the heated “oyster trust” statements, that one made me laugh out loud at my desk!”

“Oysters to Angus contains a great deal of information that will be of interest to our park visitors and St. Louis history buffs in general. In particular, Elizabeth did a great job of relating events in the Faust family to the broader picture of what was going on in the city and the country.”

“At Tony Faust’s restaurant, he rolled out the red carpet for all patrons, even those who used their fists to resolve disputes that erupted over their steins.”

*For orders of more than 5 books, additional shipping charges may apply. 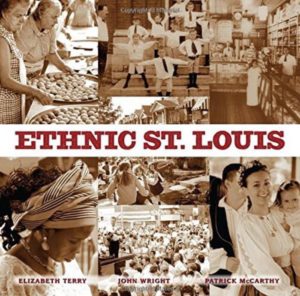 As St. Louis celebrates the 250th year since its founding, Ethnic St. Louis highlights the many communities that make St. Louis a vibrant, multi-ethnic city. Their stories-accompanied by rare photography-fill the new book Ethnic St. Louis, a rich tapestry of the people and cultures that have enriched the Gateway City throughout its history. From long-established French, German, and Irish communities, through the African American community, and the more recent arrivals of Vietnamese and Bosnian immigrants, this volume covers a broad spectrum of groups that shaped St. Louis history and daily life. Photo-illustrated vignettes convey why each community settled in St. Louis, how they changed through the years, and how they contributed to local progress and growth. A first-of-its-kind compendium, Ethnic St. Louis demonstrates the importance of diverse communities to the city’s rich past, complex current identity, and interconnected future.

Elizabeth Terry, author of Oysters to Angus: Three Generations of the St. Louis Faust Family, has a Masters in public history from James Madison University in Virginia. She manages a diverse range of projects through her historical research company, and directs an archives for a St. Louis church.

John A. Wright is a native of St. Louis, MO., and holds a Ph.D. from St. Louis University. Dr. Wright has had a long and distinguished career as a St. Louis academic leader and is an active member of the community, serving on numerous boards (e.g. the St. Louis World Trade Center and the Regional Arts Commission). He is the author of 13 books about regional history, includingExtraordinary Black Missourians (2013, Reedy Press).

Patrick McCarthy has worked with the large Bosnian community in St. Louis for the past twenty years. He is a co-author of After the Fall: Srebrenica Survivors in St. Louis . McCarthy is associate dean of libraries at St. Louis University. 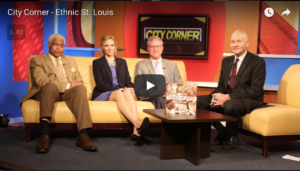 “Ethnic St. Louis is a fine new hardcover volume that talks about our town as the melting pot it has been for more than 250 years. Written by three St. Louis scholars, the 224page book demonstrates the importance of diverse communities to our city’s rich past, its complex current identity, and interconnected future.”

“Ethnic St. Louis takes a look at the many groups who’ve formed, contributed to and built our city from the early French traders to the influx of Irish and Germans to the Bosnians and now African immigrants, plus many others in between. With a wave of anti-immigrant sentiment bubbling through our nation, it’s important to remember how diversity has shaped our past and will continue to shape our future.”

“It’s not just the refugees who benefit from the fresh start in St. Louis. The city is a better place for the men and women who have brought with them inner strength, open minds, and willing hands.”